Lake Elsinore Library to screen Disney’s “Beauty and the Beast”

Despite Promises, Rey Will Be Left Out of ‘Star Wars’ Monopoly Due to ‘Insufficient Interest’

This real-life Kung Fu Panda fight between a panda and peacock will keep you ROFL-ing!

Here’s Why Leonardo DiCaprio Surrendered an Oscar to the Government

Champak Bansal (Khan), owner of a famous mithai-shop in Udaipur, has been confused all his life. This, or that? Now or later? But there’s never been any confusion when it comes to his daughter Tarika aka Taru (Madan): what she wants, she will get.

Taru’s wish, to go to the UK and study (Truford University standing in for the world-famous red brick institution), is Champak’s command. Using that as a peg, Angrezi Medium, which comes three years after Hindi Medium, goes about raising several thematic points: the love of family which subsumes all else, the very special bond between fathers and daughters, and, of course, how knowing English is a passport to better prospects.

In Hindi Medium, the physical journey essayed by the protagonists was much shorter, from traditional Old Delhi to swanky South Delhi. In this sequel, the distance is longer, from Udaipur to London, but the learnings, in spirit, are more or less similar. Family values, and blood ties, trump all else, even if it comes to realising a long-cherished dream of leading a free life in a shiny city in the West. And is freedom everything it is cracked up to be? This ‘pariaarivarik film’ spells out the answer, underlining it for all its worth.

Taru is accompanied by protective papa Champak and uncle Gopi (Dobriyal, as good as he has been before) as she steps into a new world, there to encounter a whole bunch of new characters: Kareena Kapoor as a cop, Dimple Kapadia as a stroppy elderly lady who offers rooms on rent, Ranvir Shorey as a good-hearted conman, Pankaj Tripathi as a dodgy travel agent who has a nifty side-line in fake passports.

The chief problem is a laboured plot, meandering about trying to hoover up too many things at the same time. Fortunately for us, the post-interval part takes some of the attention away from the Khan-Madan to-dos, and spreads it amongst the others. The film sets up a beat when Kapoor and Kapadia show up, showing how strong, unadorned female characters who are characters first, make things worthwhile. You wish these two, and the most excellent Shome, had more screen time, but they get lost in the muddle, which keeps getting more and more contrived and unbelievable as it goes along. 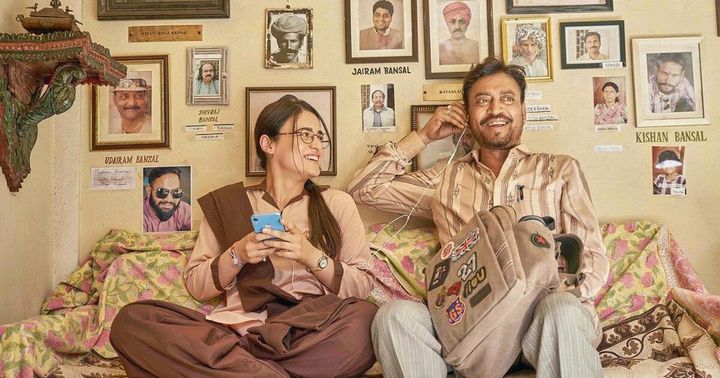 Also, you wish Madan’s act is less trying. She lifted Mard Ko Dard Nahin Hota and Patakha with her perky, fresh presence. But her Taru, delivery pinched and affected, comes off here as whiny and snivelling, an annoying creature who is oblivious of her father’s difficulties. Whatever happened to the real Madan? I want her back.

In its attempt to strike a balance between making us laugh and cry, broad comedy and wring-your-heart emotion, the film keeps swaying one way and another, resulting in sudden tonal shifts. Again, fortunately for us, this is balanced by the time spent between Irrfan and Dobriyal, even if it feels repetitive. They keep the film, and us, going.

Angrezi Medium could just as well have been called Irrfan Returns. Watching this terrific actor lighting up the screen, of knowing about his medical struggles, and the fact that he did this film while still in treatment, gives it a special bittersweet flavour. Hindi or Angrezi, whatever the medium, Irrfan is truly the message, transmitting directly from the heart. Dil se.

A wonderful serenity has taken possession of my entire soul, like these sweet mornings of spring which I enjoy with my whole heart. I am alone, and feel the charm of existence in this spot, which was created for the bliss of souls like mine. Gregor then turned to look out the window at the dull weather. Drops of rain could be heard hitting the pane, which made him feel quite sad.

Champak Bansal (Khan), owner of a famous mithai-shop in Udaipur, has been confused all his life. This, or that? Now...

Lake Elsinore Library to screen Disney’s “Beauty and the Beast”

No Result
View All Result